Duration : 4 Nights / 5 Days
Mata Vaishno Devi, the goddess also known as Vaishnavi, Trikuta (Trikoot) resides in a holy cave, which locates in the folds of the three peaked mountains named Trikuta in Katra within the state of Jammu & Kashmir. The pilgrims have to undergo a slow path of nearly 12 kms from the base camp at Katra where the passengers visits from different corners of the country are blessed with the darshan of goddess, where Mata resides in the form of three natural rock formation called the Pindies inside the cave. Darshans are open round the clock throughout the year. There are numerous modes of transportation facility, available to Bhawan from Katra, which includes Ponies, Paalkhis, Electric vehicles and also the Helicopter services which are available from Katra to Sanjichhat, about 9.5 km from Katra. 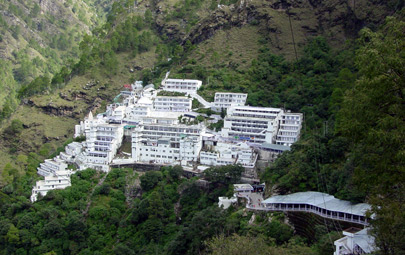 On arrival at Jammu airport / railway station, our representative will meet and transfer to the base camp at Katra. Stay in hotel for a day and overnight to overcome exhaustion of journey.

Day 2 : Mata Vaishno Devi Darshan
Breakfast at the hotel. Proceed for Mata Vaishno Devi bhawan after taking the necessary pass from the counter. It is an uphill walk of about 12 krs. These days motor vehicles are available till a certain point. After the Darshan at Mata Vaishnodevi, you may proceed to Bhairon Baba Darshan which is again two hrs uphill trek. Trek down to Katra after darshan. You may stop at some point for relax. At the evening enjoy the local market of Katra.
Overnight stay at the hotel.

Day 3 : Katra-Shiv Khori-Katra
After breakfast, proceed to Shiv Khori. It situates in between the hillocks, 80 kms from Katra. Khori means cave thus denotes Shiva’s cave. The cave is about 200 meter long, one meter wide and three 3 meter high naturally forms Shiv-Lingam. Back to Katra in the evening after darshan of Shiv cave.
Overnight stay at hotel. 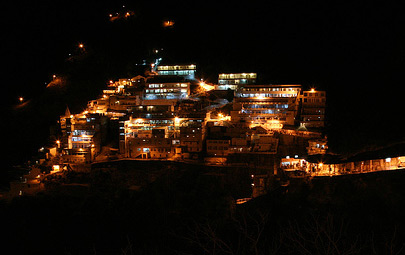 Day 4 : Katra-Patnitop-Katra
Breakfast at the hotel. Proceed to Patnitop in early morning a famous hill station which is situated on a plateau on shiwalik belt of Himalaya. It locates in Udhampur district in Jammu and Kashmir. At noon proceed to Sansar which is surrounded by gigantic conifers. In evening, again back to Katra and overnight stay at hotel.

5% GST will be applicable on above cost